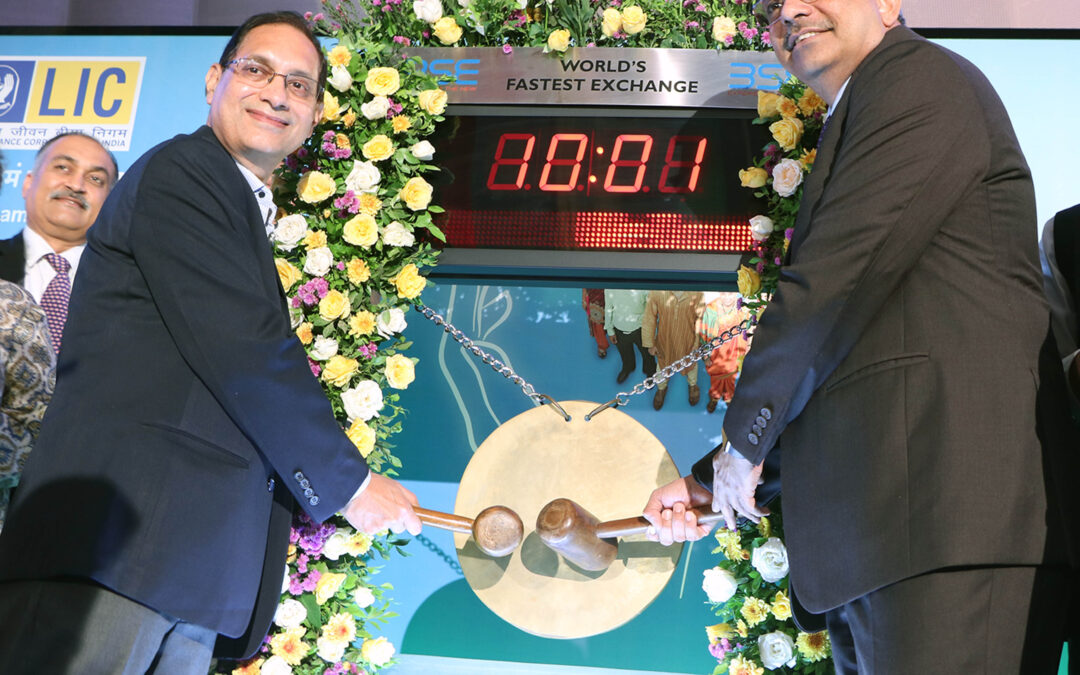 “We were not expecting on a big listing as markets were jittery, expect it to pick up,” said LIC’s Chairman M. R. Kumar

“Unofficial grey premium is trading down into negative territory mainly on the back of depressed global markets which are in the bearish zone … We expect a soft listing at +/- 5% of the offer price,” said Prashanth Tapse, research analyst at domestic brokerage Mehta Equities

Despite markets moving upwards on Tuesday, state owned Life Insurance Corporation of India (LIC) made a tepid debut on Dalal Street at Rs 867.2 on BSE, a discount of 8.62 per cent over its issue price of Rs 949. On the National Stock Exchange (NSE), the counter listed at a discount of 8.11 per cent.

The share price decline is in line with a slump in the broader market since LIC’s IPO opened for subscription on May 4.

“We were not expecting on a big listing as markets were jittery, expect it to pick up,” LIC’s Chairman M. R. Kumar told reporters after the listing ceremony.

Department of Investment and Public Asset Management (DIPAM) Secretary Tuhin Kanta Pandey said the weak debut of the country’s largest insurer LIC on the bourses was due to unpredictable market conditions and suggested investors to hold on to the stock for long-term value.

“Nobody can predict the market. We have been saying that it should not be held for a particular day but for more than a day,” Pandey told reporters after the listing of shares.

Pandey said there was some protection for retail investors and policyholders who got the shares at a discount price.

According to analysts, LIC’s investors lost over Rs 42,500 crore and the corporation’s market capitalisation fell to Rs 5.57 lakh crore in early trade against just over Rs 6 lakh crore at the issue price.

“`LIC should be able to settle its market share at 62-63% of the insurance market. Bancassurance will be huge focus for distribution going ahead, I believe going forward, we will be able to arrest fall in market share,” said Kumar.

Kumar said the response for the shares in the secondary market is going to be higher which will pull the prices up.

It (stock price) will pick up as we go along. I am sure a lot of people, especially the policyholders who have missed out on the allotment will pick up the shares (in the secondary market). I don’t see any reason why it should be tepid for too long, said Kumar .

Speaking about the IPO, Pandey said it was right-sized, considering the capital market environment, with the objective of not crowding out the capital supply.

Close to 46 per cent of the investors were from the western part of the country, 44 per cent from north and south, 9 per cent from east and north-east saw 1 per cent participation, he said.

Foreign institutional investors (FII) bids were to the tune of Rs 2,291 crore in the main book and they also invested Rs 555 crore in the anchor book, Pandey said.

This is the highest number of record bids in the history of the Indian capital market and possibly one of the largest in any IPO anywhere in the world as well. This was one of the greatest retail participation in an IPO ever, he said.

The IPO was the third largest IPO globally in the year till date, he said, adding that the aggregate IPO in Europe was less than USD 3 billion during this year till date.

It was an ‘atma nirbhar’ issue which got subscribed mainly domestically. This gives us a very-very optimistic view of the capital markets going forward, Pandey noted.

When asked about the roadmap for LIC post listing of shares, Kumar said the insurer has already introduced a couple of non-participating and guarantee products in the last quarter of FY22 and now it plans to aggressively sell these products.

The insurer may also look at launching some new products.

We would like to push the plans that guarantee returns and give good profitability margins. Participatory products have always been our strength and we will work on that strength and also get into other segments, he said.

On digitization, Kumar said the state-owned insurer has good infrastructure on that front and it will soon have a separate digital marketing channel. It will also focus on the bancassurance channel for distribution of its policies.

On a question about losing market share, he said, Market share is again a question of growth. “If I grow faster than the insurance sector then I am going to get back the market share. My base is quite huge and even if I grow slightly slower and lose market share, it doesn’t really matter. We are not going to lose (market share) any more. I think there is enough room for growth, Kumar added.,” he explained.

LIC is the fifth most valuable company in the country with a market capitalization of about Rs 5.54 lakh crore. Shares of LIC closed at Rs 875.45, down Rs 73.55 or 7.75 percent over the issue price, on the BSE.

Market capitalization is the total valuation of the company based on its current share price and the total number of outstanding stocks. It is an indicator of the fundamental strength of the company.

LIC is likely to see a lacklustre debut when it lists on Indian stock exchanges on Tuesday despite the $2.7 billion initial public offering being oversubscribed, analysts said.

The government priced LIC’s record-breaking IPO last week at Rs 949 ($12.20), the top of the indicated range. The government has raised around $2.7 billion from selling a 3.5% stake in LIC, the country’s top insurer, which is state owned. But volatility in global markets and selling pressure in the domestic stock market are likely to cast a shadow on LIC’s listing, with the shares likely to start trading near the IPO price or at a slight discount.

“Unofficial grey premium is trading down into negative territory mainly on the back of depressed global markets which are in the bearish zone … We expect a soft listing at +/- 5% of the offer price,” said Prashanth Tapse, research analyst at domestic brokerage Mehta Equities.

New Delhi had planned to list LIC in March this year but had to defer it as market conditions were not favourable in the wake of the Ukraine conflict.

The offering is seen as being important to India meeting its ambitious target for selling off state assets. The debut performance will also set the mood for forthcoming issues after retail investors were badly burnt by India’s recent large IPOs.

The price range for the issue was set between Rs 902 and Rs 949 per share. LIC offered a discount to employees and retail investors of Rs 45 per share, while policyholders were given a discount of Rs 60 rupees per share.

In the grey market, LIC shares were trading at a discount of nearly 15 rupees compared with a premium of nearly 100 rupees earlier this month.

“Even if the shares list flat on Tuesday, retail investors will still be able to make gains due to the discount that was offered so I don’t see it as a bad bet as valuations are also attractive,” Narendra Solanki, fundamental research head at domestic brokerage Anand Rathi.

IPO MARKET SLOWDOWN
The Indian IPO market, which saw dizzying growth in 2021, has had a significant slowdown this year. This shows the impact of geopolitical tensions, stock market volatility, a price correction in over-valued stocks from recent IPOs, plus concerns about rising commodity and energy prices, and slower economic growth, EY said in a report on Monday.

In the first quarter of 2022, proceeds raised through India’s primary markets were at $995 million via the three largest IPOs compared with $2.57 billion same period last year, EY said.

If market conditions improve there could be a robust pipeline of IPOs this year as more than 20 companies have filed draft prospectuses in first quarter of this year, Sandip Khetan, Partner and Financial Accounting Advisory Services Leader, EY India said.