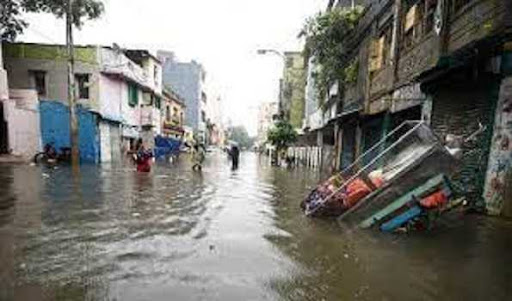 Following inspections amid showers, Stalin tweeted saying that in the past 200 years, “this is the fourth time Chennai recorded 1,000 MM (100 CM) rainfall in a single month.” he quoted experts.

The Chief Minister praised local authorities, police and government employees of various departments for their hard work without any respite.

Such dedicated work has prevented loss of lives and lowered damage to properties here to the maximum possible extent and ensured keeping the situation under control despite the heavy rainfall, he said.

In his capacity as the Chief Minister, Stalin said he worked ‘on the ground’ alongside field personnel and would continue to do so and appealed to officials and elected representatives to carry on rain related relief/mitigation work as more rain rainfall has been forecast for the next few days.

In view of widespread rainfall that include northern regions and southern parts of Tamil Nadu like Tirunelveli, and the Meteorological Department’s forecast of showers, especially in regions close to the coast till November 29 morning, authorities here said 11,329 people have been housed in 123 safe shelters.

In Chennai, 653 people have been housed in six relief centres and 825 packs of food were distributed to them today, an official release here said.

The weather office said the forecast for coastal areas include Chennai and the neighbouring Union territory of Puducherry and the ‘red shade’ for such regions indicates possibility of ‘only excess rainfall.’

In view of rainfall in catchment areas, over 8,500 cusecs of surplus water was released from reservoirs, including Poondi here -that cater to Chennai’s drinking water needs- and about 23,600 cusecs was let out from Mettur dam in Salem district.

Similarly, surplus water was released from other reservoirs like Papanasam (near Tirunelveli) and Sathanur (off Tiruvannamalai).

An IMD bulletin pointed to scattered to broken, low and medium clouds with embedded intense to very intense convection over the central Bay of Bengal, the adjoining south Bay of Bengal and South Andaman sea.

A low pressure area is likely to form over South Andaman sea around November 29. “It is likely to become more marked and move west-northwestwards during subsequent 48 hours,” the bulletin said.

Minister for Revenue and Disaster Management, KKSSR Ramachandran said that from October 1 and till November 27, the state received about 60.33 CM rainfall as against the usual 34.57 CM for this period, which is 75 per cent in excess.

An IMD official told PTI: “From October 1 to November 27, Tamil Nadu received 60 CM rainfall and the normal is 33 CM, which is 74 per cent more. As regards Chennai, the metropolis has registered 106 CM (during the same period) rainfall, while 60 CM is normal and hence 77 per cent excess.”

“In the past 24 hours, three people, one each in Ariyalur, Tirunelveli and Tirupur districts have died in rain related incidents and in total about 273 houses have witnessed damage,” a government release said.

Stalin, along with his Cabinet colleagues and top officials, inspected several inundated areas, including Pattalam and Pulianthope through the day and directed officials to expeditiously bail out flood waters.

The Revenue Minister reviewed the rain related relief initiatives at a high-level meeting, in which top officials participated. Flood water is being drained here in as many as 220 water-logged areas using heavy duty motor pumps and fallen trees have been removed.

Also, nearly 1,000 heavy duty pumps and 46 excavators have been kept ready for use, authorities said.
For assistance, people may call the 24 x 7 toll free number 1070 (State-level control room in Chennai) or 1077, the number for control centres in districts. Also, residents in Greater Chennai Corporation areas may call 1913 to register complaints.