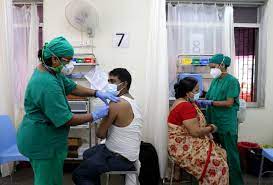 Only 11 per cent of the nearly 69 crore eligible beneficiaries aged 18 years and above taking the precaution dose of COVID-19 vaccine till July 25, has become a cause of concern for the Centre, with officials attributing the slow uptake of the third shot to complacency and waning of coronavirus fear.

The drive ‘COVID Vaccination Amrit Mahotsava’, aimed at boosting the uptake of Covid precaution doses among eligible population, is being held as part of the government’s Azadi Ka Amrit Mahotsav to celebrate the 75th anniversary of India’s Independence.

Official sources further said 29 per cent of the 10.43 crore eligible individuals aged 60 years and above have been administered precaution dose of COVID-19 vaccine till July 25.

According to sources, around 4 crore people have not yet taken the first dose, while about 7 crore are due for their second dose. ”Of 68,97,62,152 people eligible for precaution dose, only 7,30,96,284 have taken it so far. In a few days, the number of eligible people will increase to 93 crore,” they said.

Asked about the slow pace of vaccination, an official source said, ”Complacency has set in among people. Also, the fear of Covid is no more there as people have now become familiar with the disease. These are the main reasons for the slow uptake of precaution dose among the eligible population.”

Asserting that coronavirus was not yet over, the sources said people who are eligible for the vaccine doses concerned should take them to limit the spread of the infection in the community.

Notably, studies at the Indian Council of Medical Research (ICMR) and other international research institutions have suggested that antibody level wanes after around six months after the primary vaccination with both doses and giving a booster increases the immune response.

”With almost two-and-a-half years into the pandemic, there is an increased level of fatigue amongst health care workers, field staff and in the community, necessitating a need to collectively reinvigorate the system, strengthen public and private hospitals, and remove any sense of complacency and fatigue.

”We must continue building on the progress made so far to bring the pandemic situation under control, and disseminate information to intensify the implementation of free precautionary doses for 18 plus population under ‘Covid Vaccination Amrit Mahotsav’ till September 30,” the source said.

Spread awareness within community on the infection spread, need for Covid appropriate behaviour and vaccination in areas reporting high cases and positivity is crucial, it said, reiterating the importance of the five fold strategy of ‘test, track, treat, vaccination and adherence to Covid Appropriate Behaviour’.

The countrywide COVID-19 vaccination drive was rolled out on January 16 last year with health care workers getting inoculated in the first phase. Vaccination of frontline workers started from February 2 last year.

The next phase of COVID-19 vaccination commenced on March 1 last year for people over 60 years of age and those aged 45 and above with specified comorbid conditions. Vaccination for all people aged more than 45 years began on April 1 last year.

The government then decided to expand the ambit of the vaccination drive by allowing everyone above 18 years to be inoculated against Covid from May 1 last year.

Inoculation of adolescents in the age group of 15-18 years commenced on January 3.

India began administering precaution doses of vaccines to healthcare and frontline workers and those aged 60 and above with comorbidities from January 10.

The country began inoculating children aged 12-14 from March 16 and also removed the comorbidity clause making all people aged above 60 eligible for the precaution dose of Covid vaccine.