Crypto collapse intensifies,Over $200 billion wiped off in a day 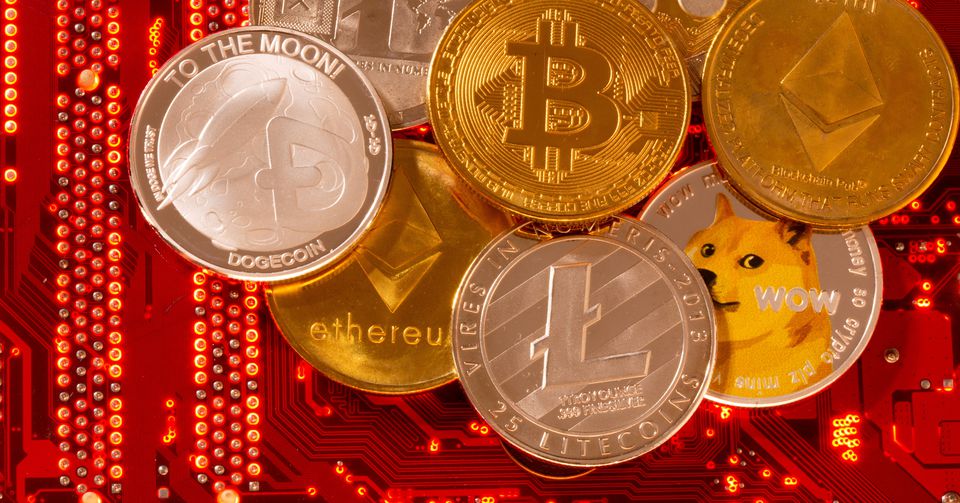 Cryptocurrencies have been swept up in a sell-off in risk assets, which has picked up steam this week as data showed U.S. inflation running hot, deepening investor fears about the economic impact of aggressive central bank tightening.

The sell-off has taken the combined market value of all cryptocurrencies to $1.2 trillion, less than half of where it was last November, based on data from CoinMarketCap

A massive sell-off in cryptocurrencies wiped over $200 billion of wealth from the market in just 24 hours, according to estimates from price-tracking website CoinMarketCap.

The broad plunge in the crypto complex, driven by the collapse of the TerraUSD stablecoin, hit major tokens hard. Bitcoin plunged by as much as 10 per cent in the last day to its lowest level since December 2020, while Ethereum dropped as much as 16 per cent.

The meltdown in TerraUSD, one of the world’s largest stablecoins, rippled through cryptocurrency markets on Thursday, pushing another major stablecoin Tether below its dollar peg and sending bitcoin to 16-month lows.

Cryptocurrencies have been swept up in a sell-off in risk assets, which has picked up steam this week as data showed U.S. inflation running hot, deepening investor fears about the economic impact of aggressive central bank tightening.

The sell-off has taken the combined market value of all cryptocurrencies to $1.2 trillion, less than half of where it was last November, based on data from CoinMarketCap.

Tether, a reserve-backed stablecoin which is supposed to be pegged 1:1 to the U.S. dollar, dropped to as low as 95 cents earlier in the global session, according to CoinMarketCap price data. It was last at 99 cents.

Despite the volatility, U.S. Treasury Secretary Janet Yellen said stablecoins like Tether and TerraUSD do not yet pose a systemic risk to the financial system.

“I wouldn’t characterize it at this scale as a real threat to financial stability, but they’re growing very rapidly and they present the same kind of risks we have known for centuries in connection to bank runs,” she said during a House Financial Services Committee hearing.

The carnage showed signs of spreading further Thursday as crypto-related stocks in Asia also cratered. Hong Kong-listed fintech firm BC Technology Group closed down 6.7 per cent. Japan’s Monex Group — which owns the TradeStation and Coincheck marketplaces — ended the day down 10 per cent.

Investors in the crypto space are no stranger to wild swings in the market, however, and Bitcoin and Ethereum pared losses quickly to trade down 4.2 per cent and 9 per cent, respectively, as of 4:45 pm Hong Kong time.

Ether , the world’s second-largest cryptocurrency, fell to its lowest since June 2021, sinking as low as $1,700.

Unlike previous financial market sell-offs, when cryptocurrencies have been largely untouched, the latest selling pressure in digital currencies has undermined the broader argument that they are dependable stores of value amid market volatility.

NOT-SO-STABLECOINS
Stablecoin TerraUSD has been hit by the turmoil and broke its peg to the U.S. dollar, which led to it falling as low as 31 cents on Wednesday. On Thursday it was trading around 38 cents. “Unfortunately, the fallout from this situation goes beyond the material losses sustained by investors,” said Anto Paroian, chief operating officer at crypto asset hedge fund ARK36.

“The de-pegging will likely result in a substantial regulatory risk – if not for the whole crypto space, then certainly for the stablecoins market.”

Stablecoins are digital tokens pegged to the value of traditional assets, such as the U.S. dollar. But TerraUSD is an algorithmic, or “decentralised”, stablecoin, and was supposed to maintain its dollar peg through a complex mechanism which involved swapping it with another free-floating token.

On Thursday, Terra developers halted the network’s blockchain to prevent attacks following the collapse of its algorithmic stablecoin and the related Luna token. The Terra blockhain, however, has since restarted.

The non-profit Luna Foundation is an affiliate of Terraform Labs, the company behind the TerraUSD.

Even stablecoins backed by traditional assets were showing signs of stress on Thursday.

Tether slipped below its 1:1 dollar peg, hitting a low of 95 cents around 0724 GMT on Thursday, based on CoinMarketCap data.

Paolo Ardoino, Tether’s chief technology officer, said in a Twitter Spaces chat that the stablecoin had reduced its exposure to commercial paper over the last six months and now holds the majority of its reserves in U.S. Treasuries. read more

Tether is the largest stablecoin by market cap, and, along with USD Coin and Binance USD, they account for almost 87% of the total $169.5 billion stablecoin market, according to CoinMarketCap.

The large number of centralised cryptocurrency exchanges and decentralised venues, each with their own liquidity profile and credit risk, was adding to price distortions across the market, Denis Vinokourov, head of research at Corinthian Digital Asset Management, said.

“The spillover effects into other stablecoins is in part driven by the fragmented nature of the market,” Vinokourov said.

Market players are still assessing the impact of TerraUSD’s troubles on investors.

In its biannual Financial Stability Report on Tuesday, the U.S. Federal Reserve warned that stablecoins are vulnerable to investor runs because they are backed by assets that can lose value or become illiquid in times of market stress.